From Spectator to Athlete

When I first met Simon Wilkins, he was 30kg heavier, inactive and definitely not impressed at having to sit on the sideline watching sport. At the time I trained his wife Vicki and she had competed for a number of years in triathlon. We had tried to influence Simon, but he was not interested.

Fast forward 5 years later and he completed his first HALF IRONMAN Triathlon (1.9km Swim, 90km Bike Ride, 21.1km Run). Not only has he lost the weight, he now can proudly say he finished one of the most challenging triathlons in Australia.

Simon is an inspiration to anyone who wants to change their life around. He went from being inactive, unmotivated and eating unhealthy…to being active, motivated, eating better and achieving great milestones in sport. 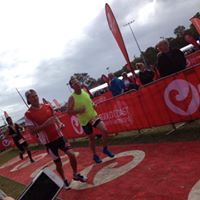